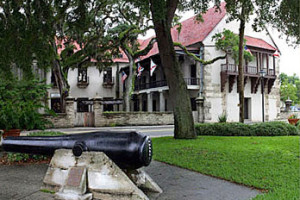 The Governor’s House dominates the west end of the Town Plaza in historic downtown St. Augustine, a unique Spanish land use component lying within a National Historic Landmark District. [i] Spain’s 1573 Law of the Indies, Leyes de los Indies, specified that colonial town plans set aside such a plaza for government, church and public use. Along coasts, plazas were to begin at the waterfront – to see and to be seen. Since 1598, a government building has stood on this site with a view of the harbor landing, accommodating administrative headquarters and residences of colonial governors appointed by the Crowns of Spain, then Britain, then Spain again.[ii]After Spain ceded Florida to the United States in 1821, this current Government House served as a courthouse and briefly as a Capitol of the new Territory of Florida. In 1836, the building’s crenellated five-story tower and “a Grand portico decorated with dorick Pillars and Entablature” were removed by Robert Mills, famed architect of the Washington Monument.

The Governor’s House is one of the state-owned buildings managed by the University of Florida “to ensure long-term preservation and interpretation of state-owned historic properties in St. Augustine while facilitating an educational program at the University of Florida… responsive to the state’s needs for professionals in historic preservation, archaeology, cultural resource management, cultural tourism, and museum administration and will help meet needs of St. Augustine and the state through educational internships and practicums.” [viii]

The Governor’s House, located at 48 King Street, is open to the public daily from 10 a.m. to 5 p.m. with exhibits and visitor information services. A lobby exhibit explains the rich history of Government House and its prominent location in the St. Augustine historic district.The Governor’s House gallery hosts rotating exhibits that are free and open during regular business hours.